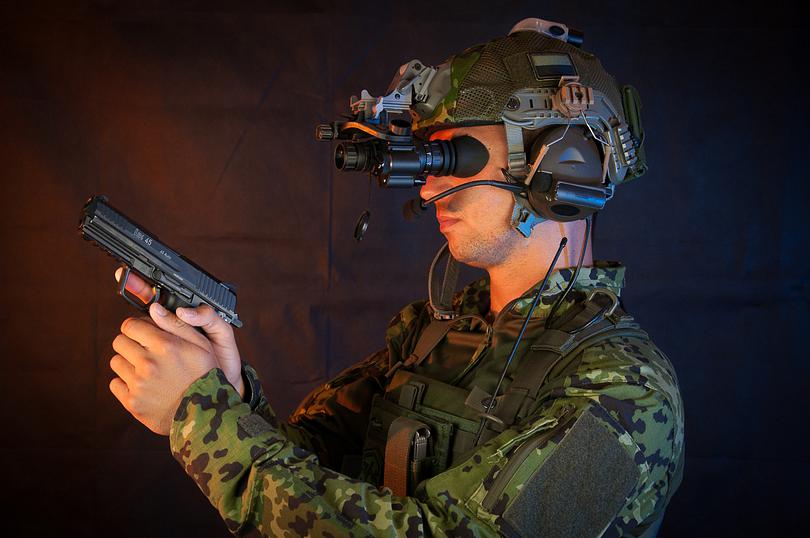 Night vision–the Holy Grail of gear any airsofter dreams about. Having the advantage of seeing better at night has been looked for since the very first battles ever took place. Night vision devices (NVDs for short) give you that ability. There are many different types available, from older technology, to the newest one that costs an arm and a leg. Or do they?

In United States access to 3rd generation night vision is easy. There are many manufacturers offering their devices which also brings the prices down. In Europe this is less so. Access is more limited and the prices are higher. The technology can be different too, as the most popular manufacturer of the image intensifier tubes focuses on an improved 2nd generation technology. If you are looking for a more affordable solution, look no further. ACTInBlack comes to the rescue. 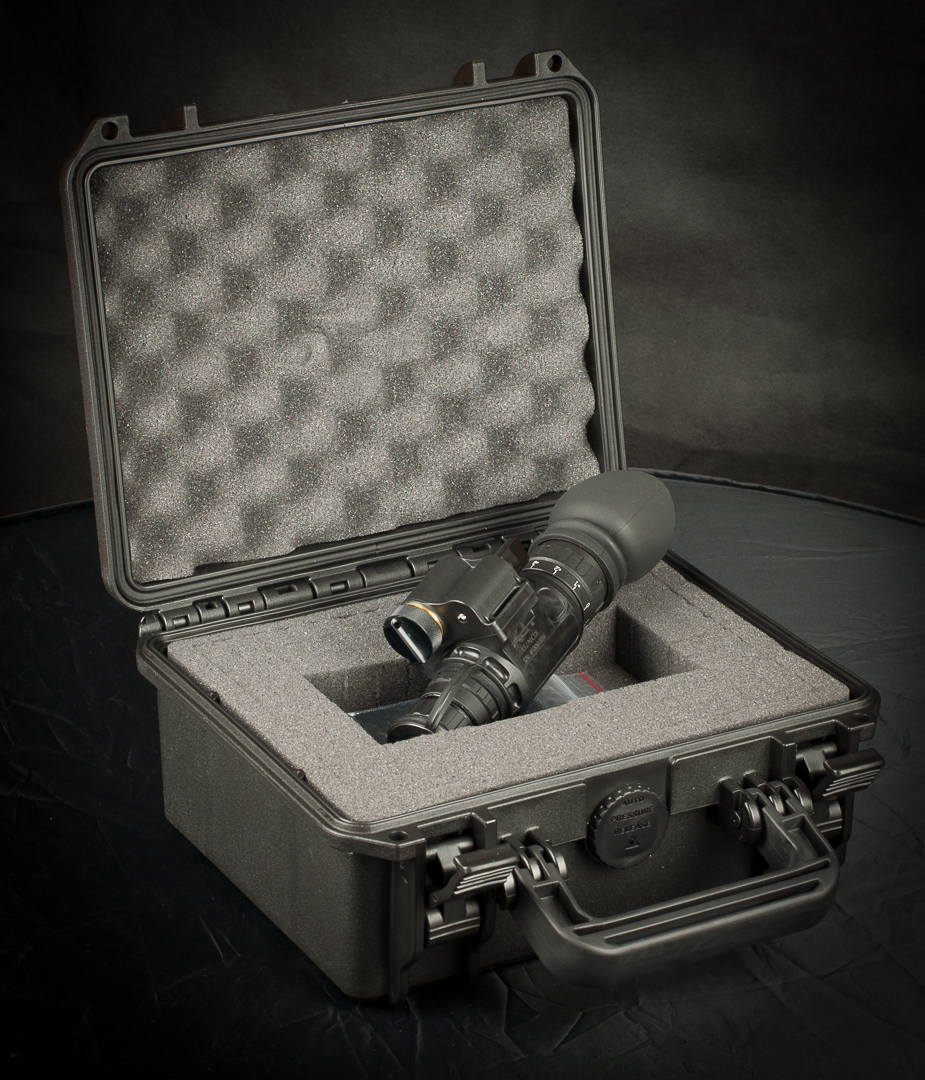 ACTInBlack is a Luxembourg based company specialising in night vision optics. Apart from their standard military-focused offering of NV equipment, their unique product is the Lunox. It’s a more affordable but still milspec standard compliant monocular housing offered with a selection of either Photonis Commercial or Harder Commercial tubes, primarily focused on civilian market. The idea is that Lunox uses cheaper tubes that have not met rigorous military specifications and therefore won’t be used by military. Most of the time these tubes well exceed the minimal specs, and are in fact great tubes for a lower price point. Our unit doubled or even tripled the minimal values of the parameters! 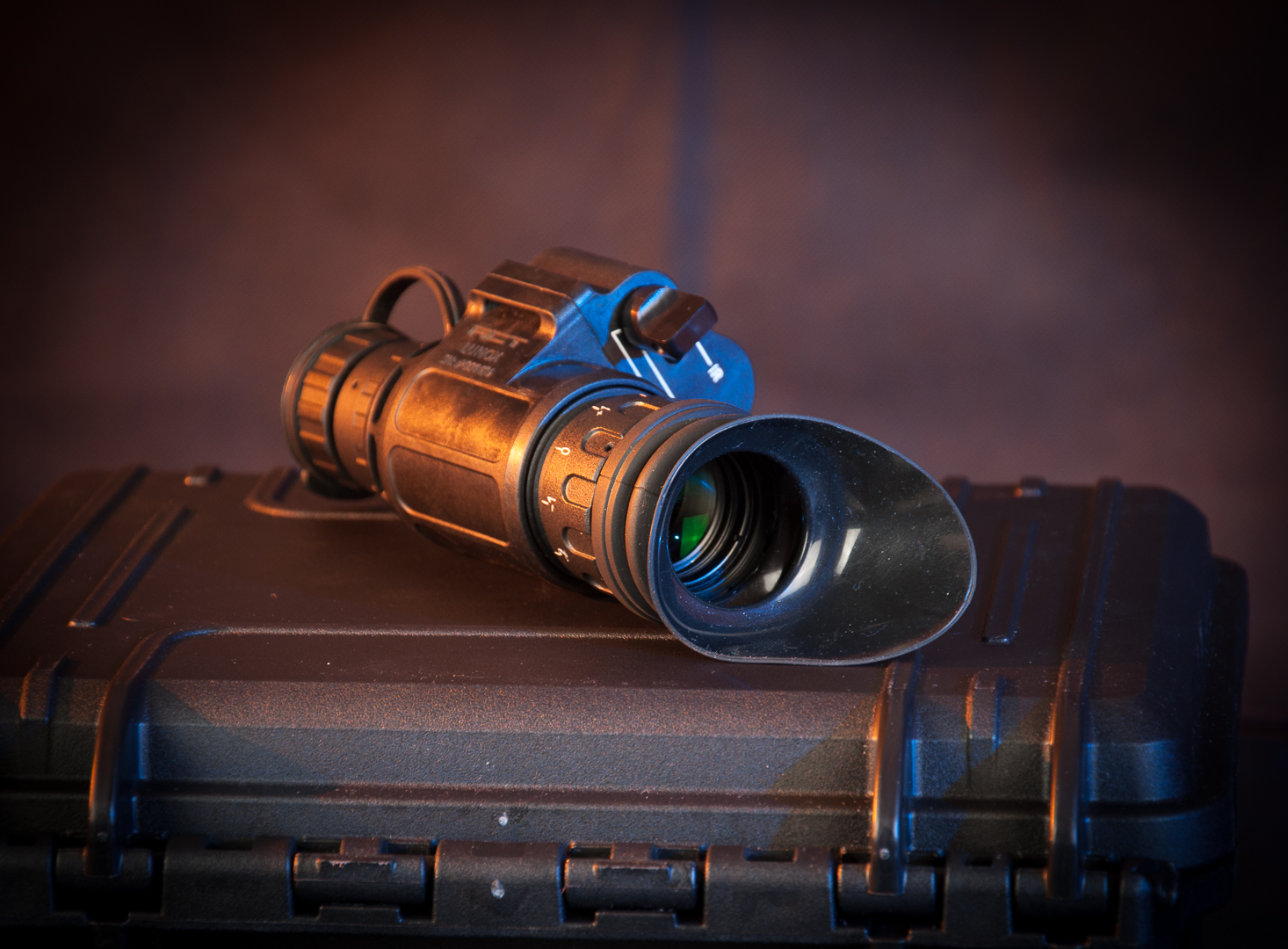 Lunox comes in a fantastic hard case with configurable foam inserts, perfectly protected. The unit housing is made of glass-fiber reinforced polymer with weight shaving cutouts. Don’t be worried though. The material is very durable and meets military requirements. The unit is powered by one CR123 battery and allows for 50 hours of operation. The included switch has three settings which allow the user to turn the device on, and with one more turn, enable the built-in IR illumination. The third setting is obviously the OFF position.

The eyepiece contains full diopter adjustment, from +4 to -6 and features a detachable eye-cup which helps mitigating the green glow bouncing off the eyes, so typical for night vision equipment. Removing it allows photographers to connect it to their cameras for example.

The front lens allows for easy adjustment of focus. The range is from 25cm to infinity. I really enjoyed how smooth the operation was. Does not matter whether the user wears gloves or not, it’s always easy to adjust. Front can also be covered with included rubber cup, which contains a pin-hole. Great for trying out the device during day time. The body itself is laser engraved with the name of the product and its serial number. 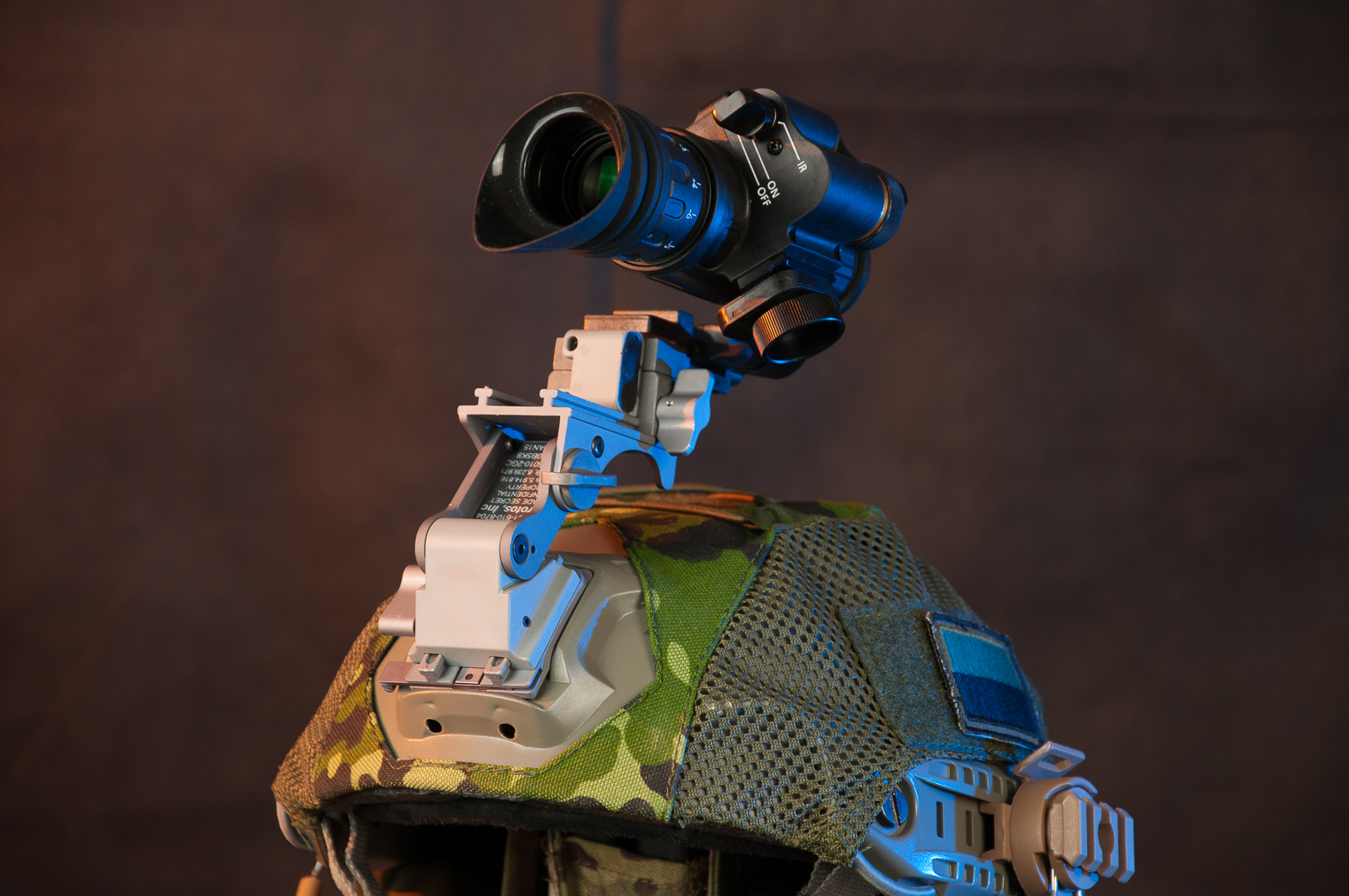 The Lunox can be ordered with either MINI-14 or PVS-14 connector. We chose the more popular PVS-14 one. The review unit came with additional Norotos Rhino mount and PVS-14 J-arm used to attach the monocular to the mount. These have to be ordered separately. The J-arm allows for mounting either on your left or right eye, depending on situation or user preference. The arm screws directly to the connection port on the monocular, and then easily pops-in into the Rhino mount with an easy-release system. 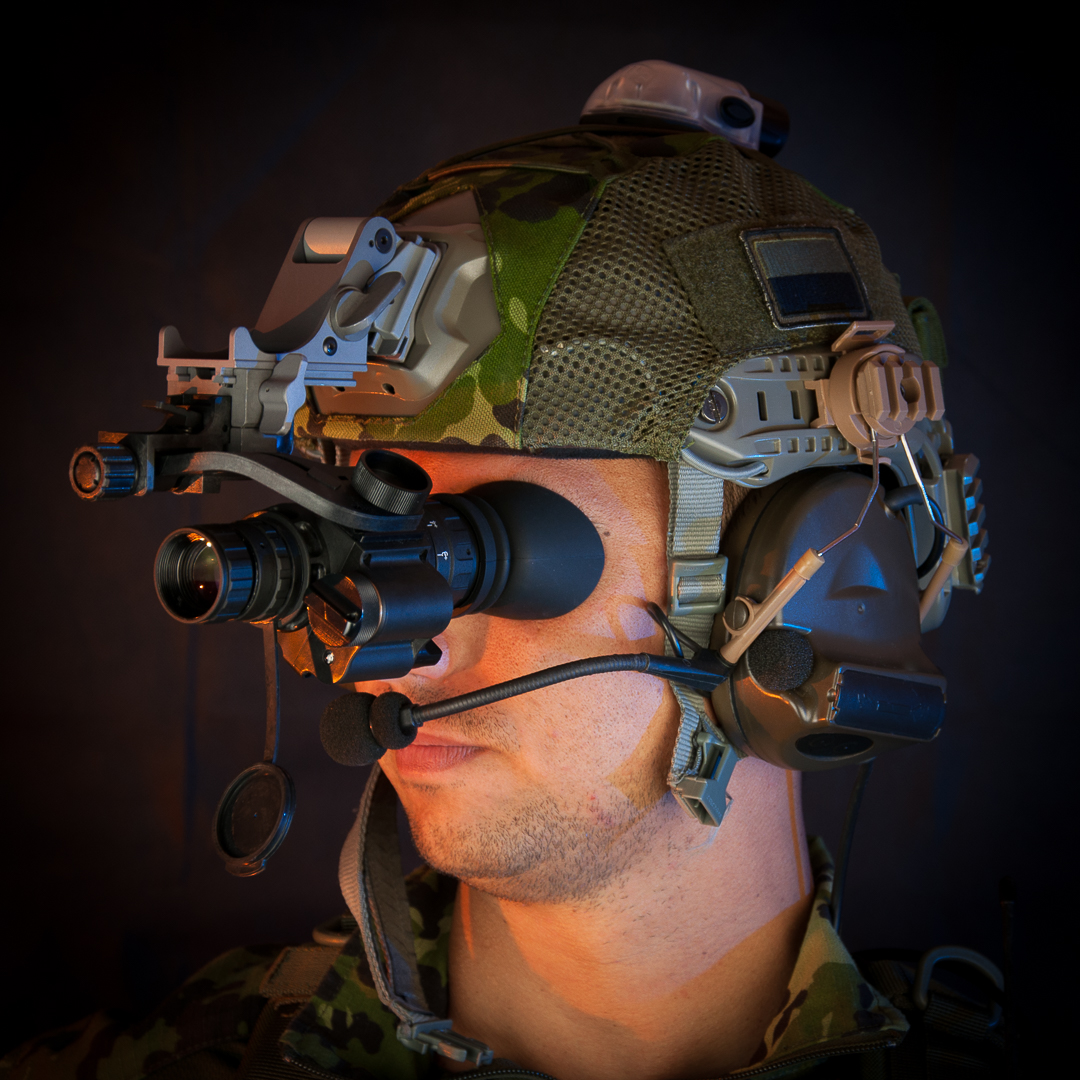 Let’s turn it on

I can see you! We’ve tested the monocular in few different environments. We tried it at home, we took it for a hike at night, and even during a two-day milsim. We were really impressed with the performance. The Photonis tube worked flawlessly during full-moon nights. That was not really something unexpected as those tubes are supposed to work great in that setting. What was interesting thought, is how well they performed where the ambient light was scarce. Deep woods were not a challenge anymore during the night patrols. Great visibility (that infinite focus was not a lie!) allowed us to spot enemy patrols from afar. The IR laser from our DBAL A2s was more than enough to let the others know and point at the points of interest easily.

Navigation with only one monocular is also interesting as it still gives you more panoramic vision through the eye without NV, with the central green portion giving you the extra kick. Basically walking around with both eyes opened is a breeze.

Inside of buildings was also bright enough. We never had any need to turn on our IR illumination or laser to aid the night vision. Photonis tubes are high-end intensifiers and it shows.

Speaking of IR though. The built in illumination is very soft and perfectly illuminates a completely pitch-dark room. You will never be able to leave the IR on without noticing as you get a dim red LED-like indication inside of your eye-piece. Same goes for the low-battery indication.

The resolution of the image produced was very high, and really, it’s quite tricky to capture it without a properly connected camera. We tried our best, but the image seen with your own eyes is an order of magnitude better. Solid thumb-up for the image quality.

The weight of the device is great, and helmet mounting is clearly the way to go. Walking around the forest for the whole night was not a problem. 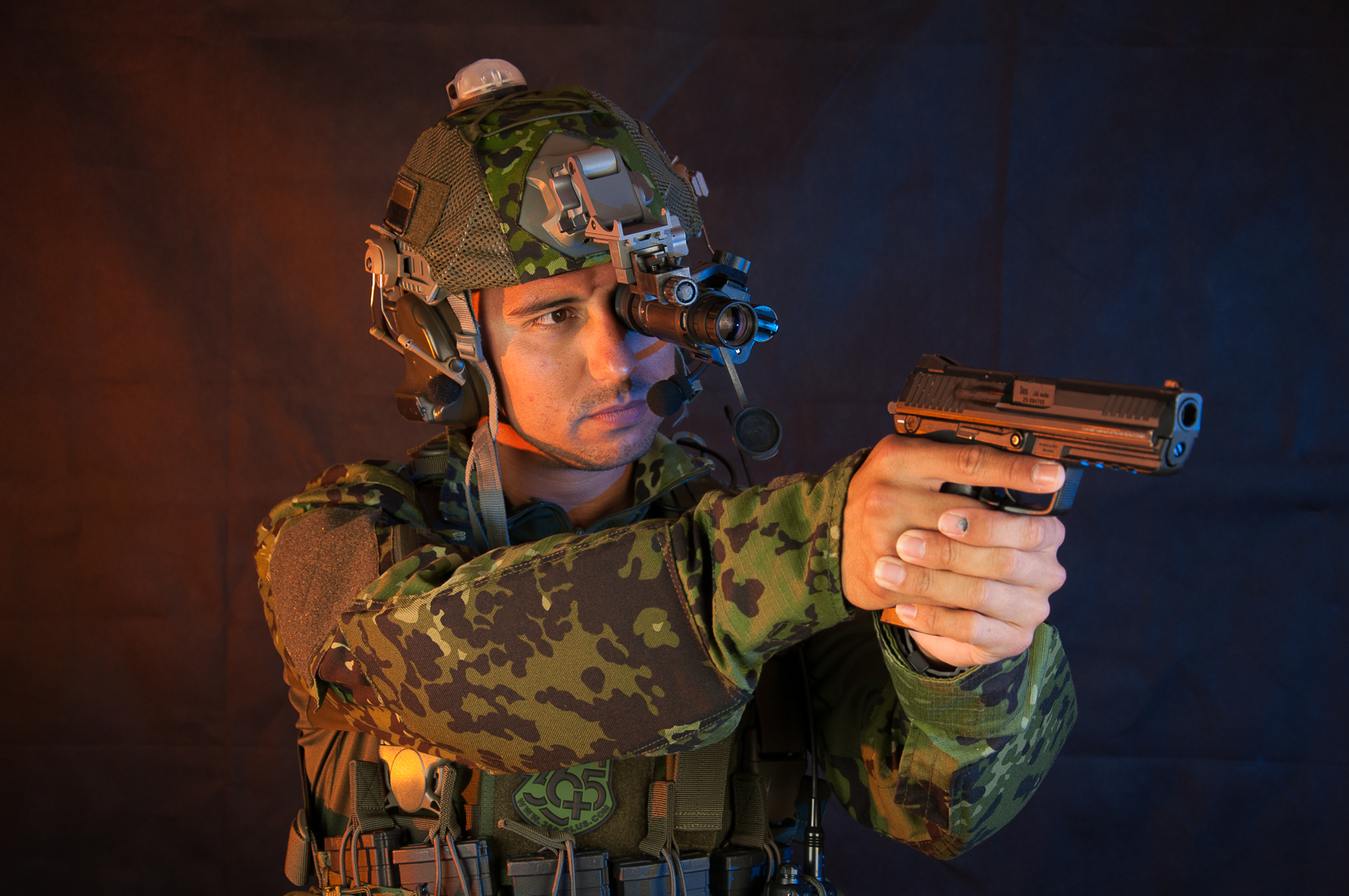 We were very pleased with the build quality of the unit and the included Photonis tube. Given how robust it is and how great the image produced is, I can’t think of any reason why somebody would not want to pick this particular model from ACT’s offering. It’s a lightweight monocular that comes with a standard mount port, which automatically gives the user access to any third-party mounting systems or accessories. All this for an affordable price. 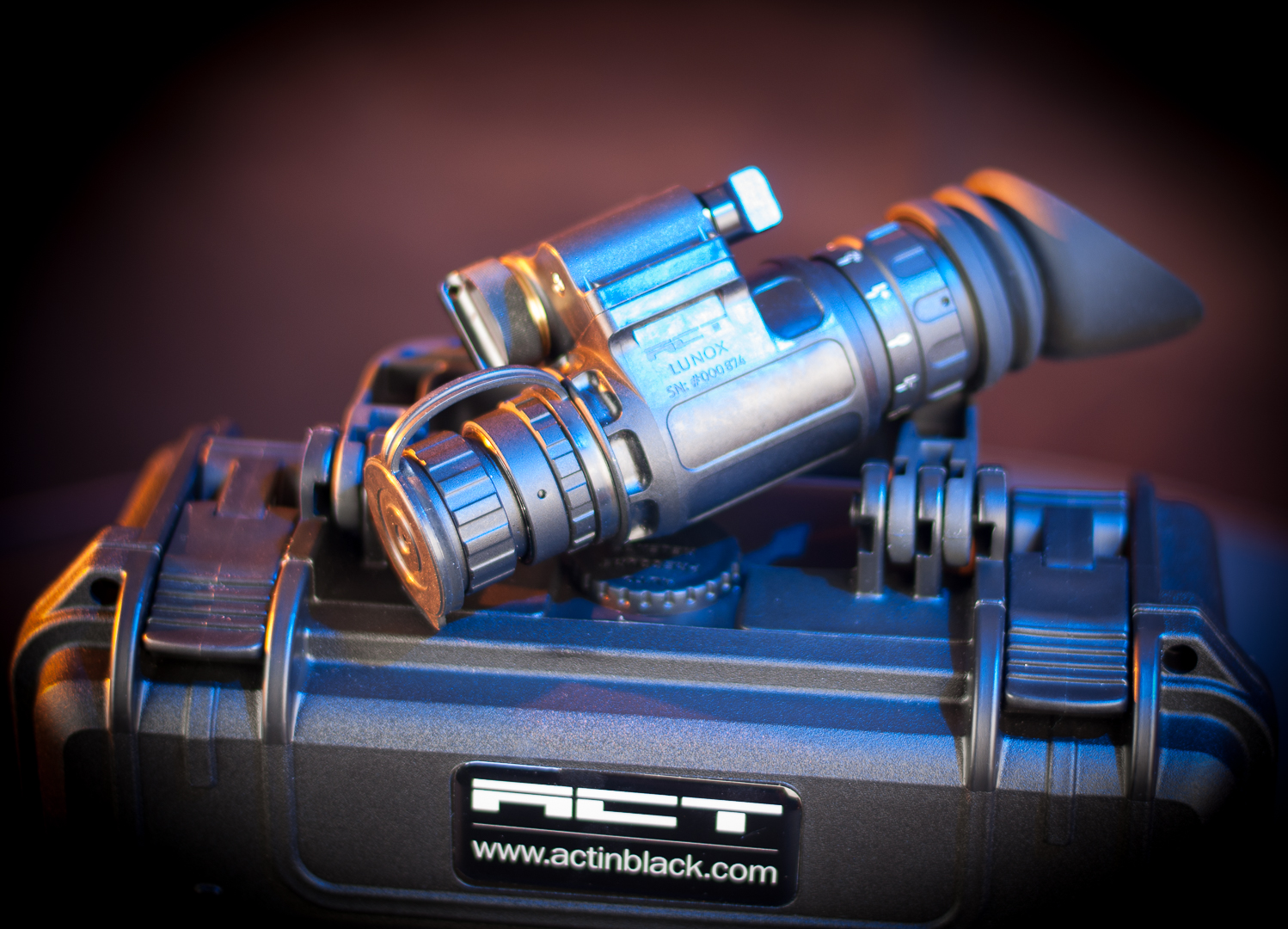