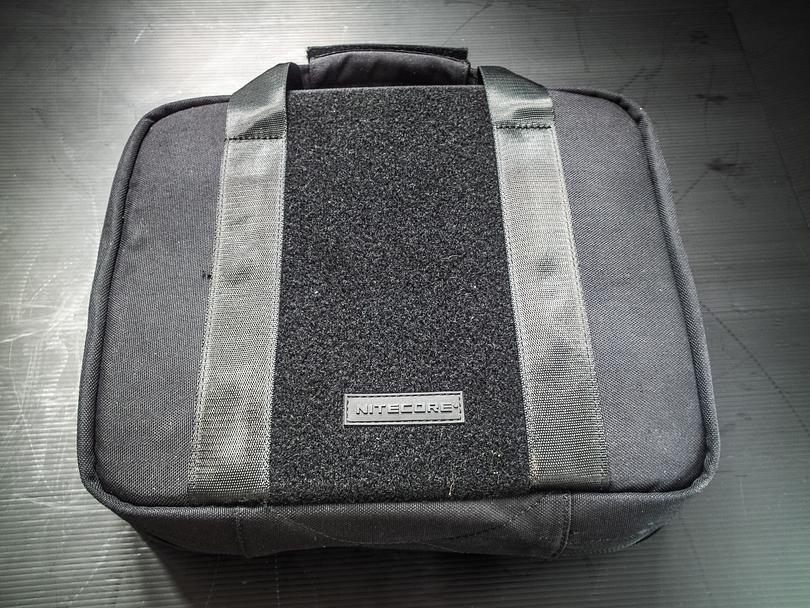 So a few weeks back in mid March I was informed by Piotr at TacticalTwoHQ that a care package was inbound from Nitecore, a name I had only just started hearing about but apparently a rapidly rising star in the global torch market. Grand, I thought, cool freebies to play with and review. What I arrived to the next Monday morning can only be described as better than an early Christmas.

Having just acquired my most recent purchase of a KWA H&K USP Compact GBB pistol exactly a week before I had started pondering how best to store and transport my increasing airsoft gun collection in a more manageable - and preferably, more modular - fashion. I had also been lamenting my inability to keep my various magazines in order and prevent them clattering together in transit in the various bags or carry methods I had been experimenting with.

So I got to work and our receptionists collared me to tell me a package had come for me from Hong Kong. Odd, I thought, I don’t remember ordering anything. I saw the label on it and thought ‘OK Nitecore, but this is rather large for a sample torch...’ however confusion soon lead to elation upon opening the package to find a reasonably vast array of Hook & Loop goodies courtesy of Nitecore’s tactical gear department… I will also get around to a thorough review of the P26 waterproof multifunction torch they bestowed upon me, but first I have to deacon-ise you regarding the utility of their gun cases and related accessories.

Along with their very nice NTC10 pistol case, they sent me two each of all their Hook & Loop (Velcro) mountable retainers - the NHL01 Concealed Carry Weapons pistol holders are an adjustable wrap-around unit which encompasses your pistol’s trigger guard and slide and then secures it to a suitable velcro soft-looped surface - in this case the inner lining surface of their NTC10 case and its divider accessory mounting panel which allows for further pistols or other equipment to be fitted to a reversible/ removable velcro in panel which fixes to the central fold/bottom of the case. 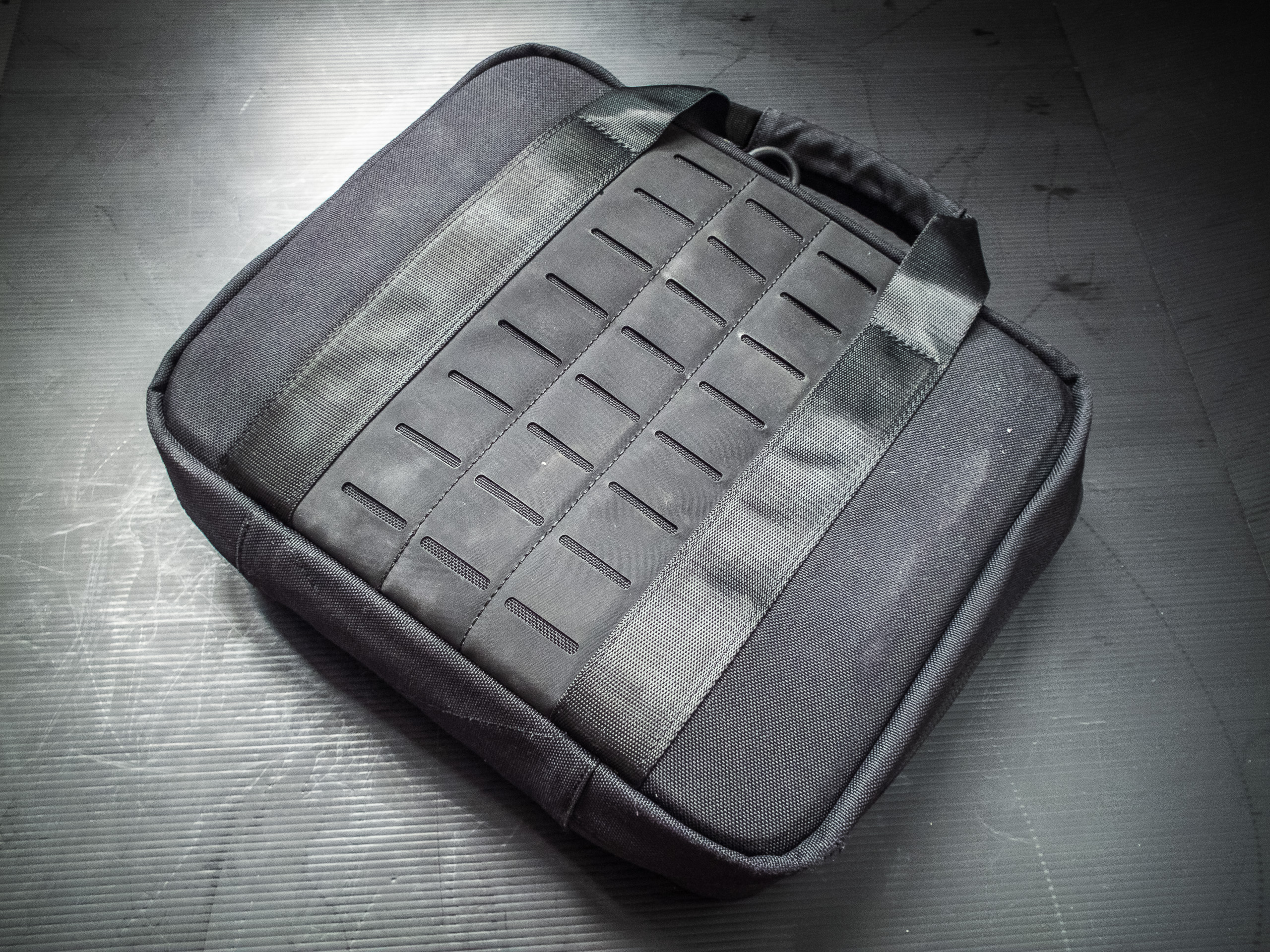 Their NHL02 holders are perfect for either two 9mm/0.45cal double stack or even 4.6mm MP7 magazines - their upper elasticated surface retains the magazines snugly and separates them slightly to prevent them clattering together during transit, and then of course the whole units can be stuck wherever you fancy - I imagine you can also use them on tactical gear, although I have other magazine pouch options already in use, but the concept is there at least. 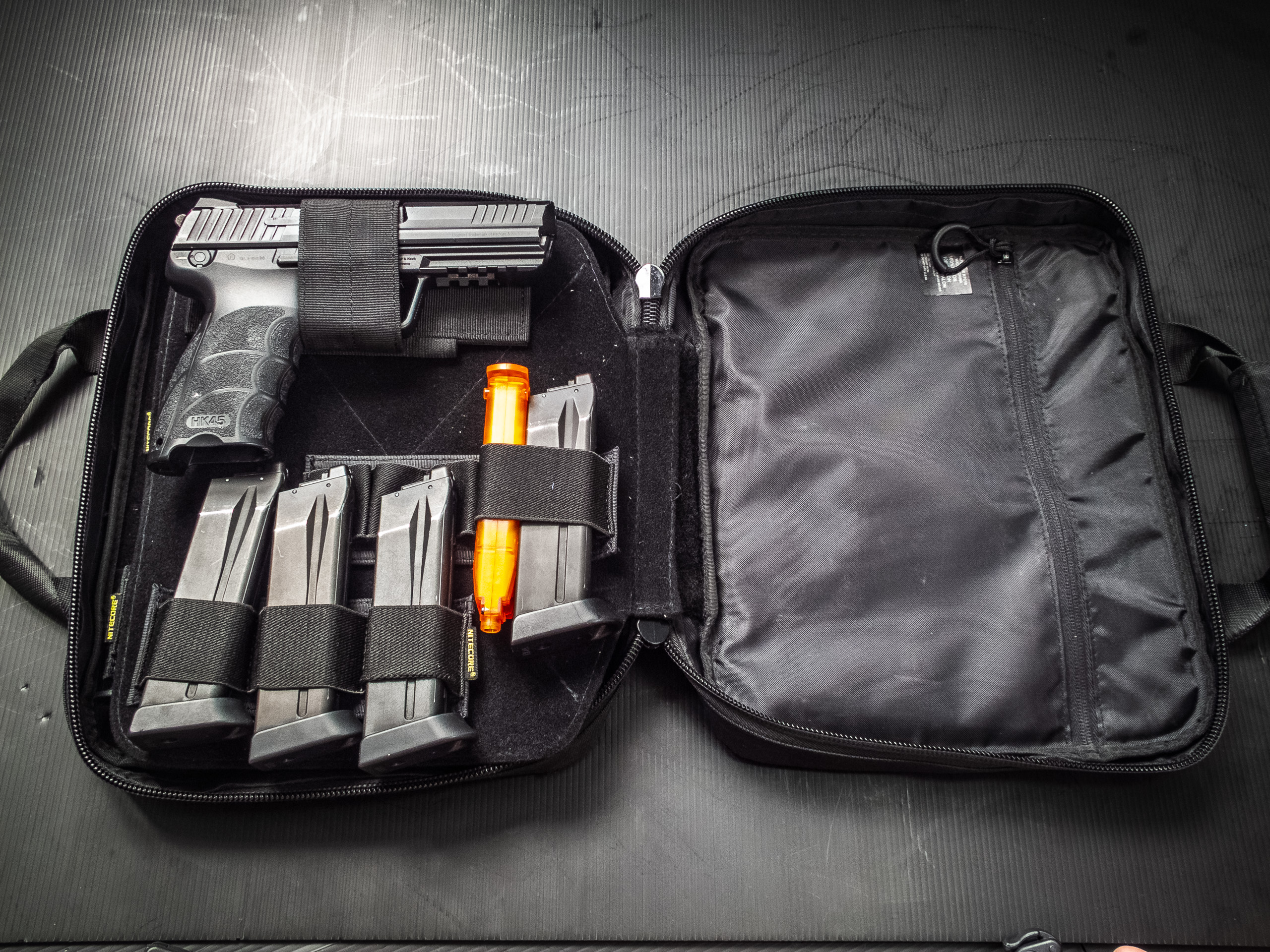 The NHL02S holders are basically a miniaturised version of the NHL02 and are perfect for two shotgun shells or similar sized objects such as batteries or other oddments that you might find in any properator’s admin panel. 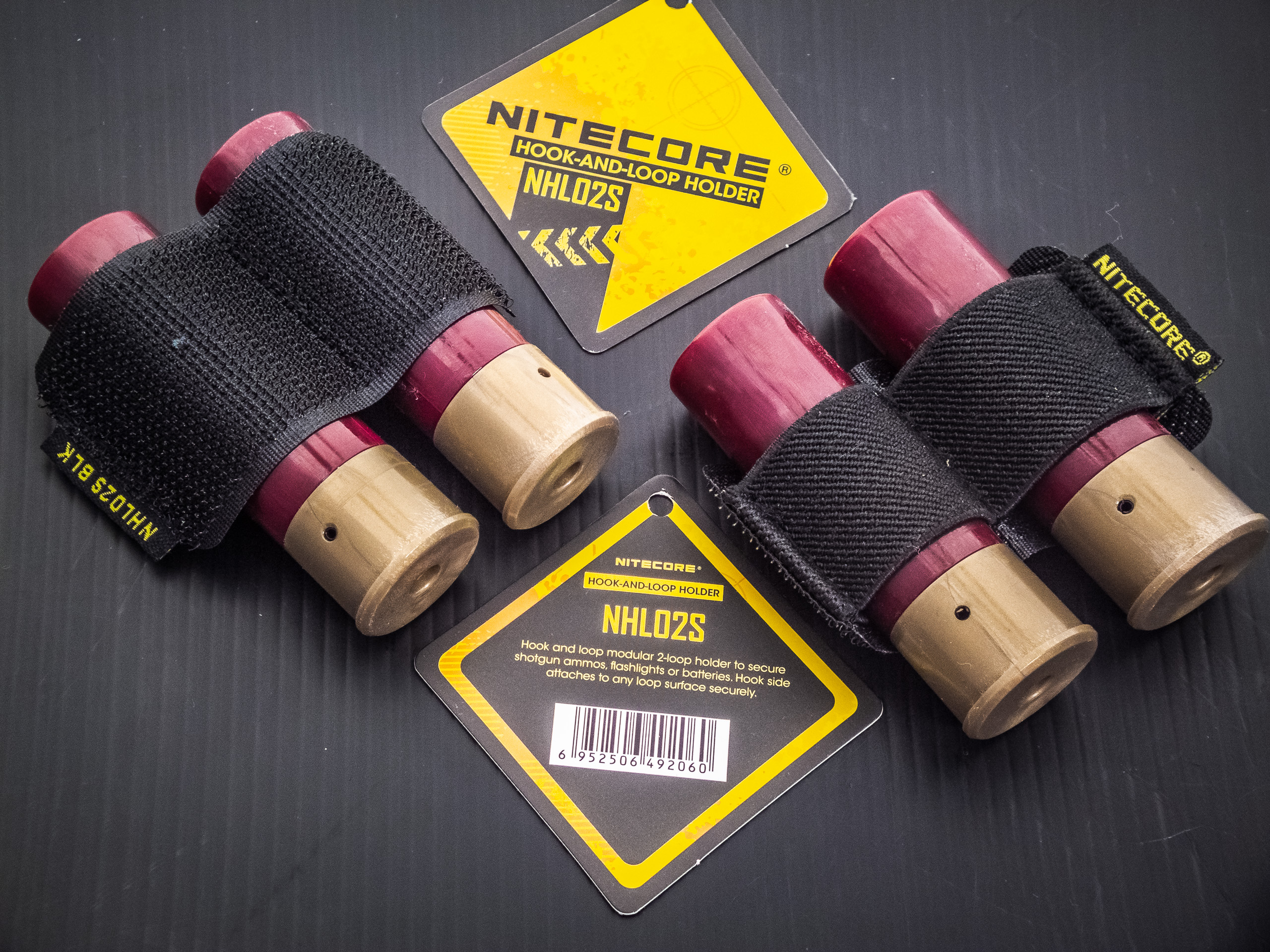 The NHL03 holders are a triple magazine version of the NHL02 which again will happily accommodate your 9mm/).45cal/MP7 mags in a comfortable and practical fashion. 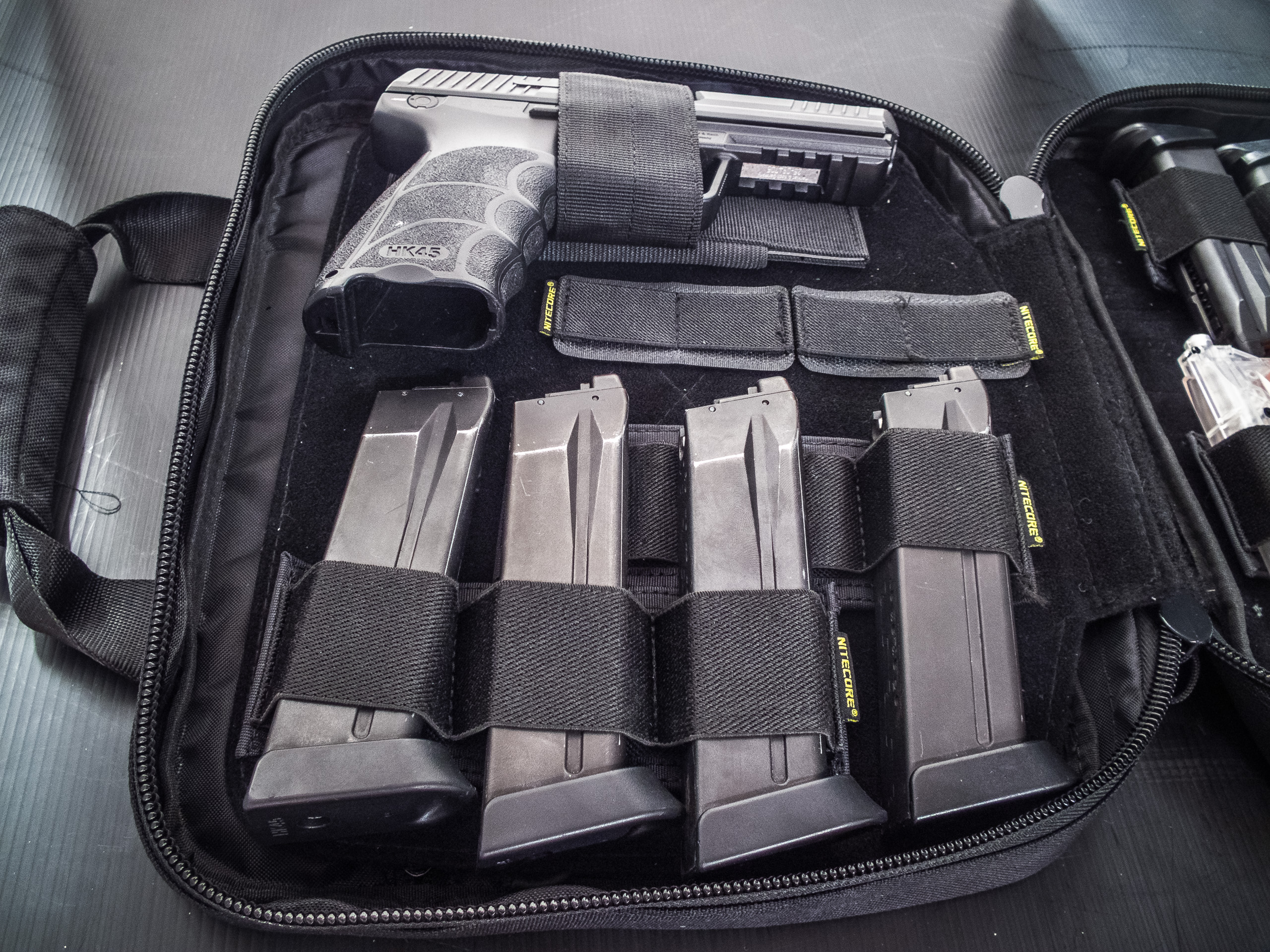 Finally the NHL04 are a hybrid of shotgun/admin and utility accommodating elasticated panels - three shotgun shell sized loops and one larger one which I’ve personally found is perfect for two pistol magazines or similar sized speedloaders to be held in back to back with minimal fuss or rattle and have started using them for that purpose. 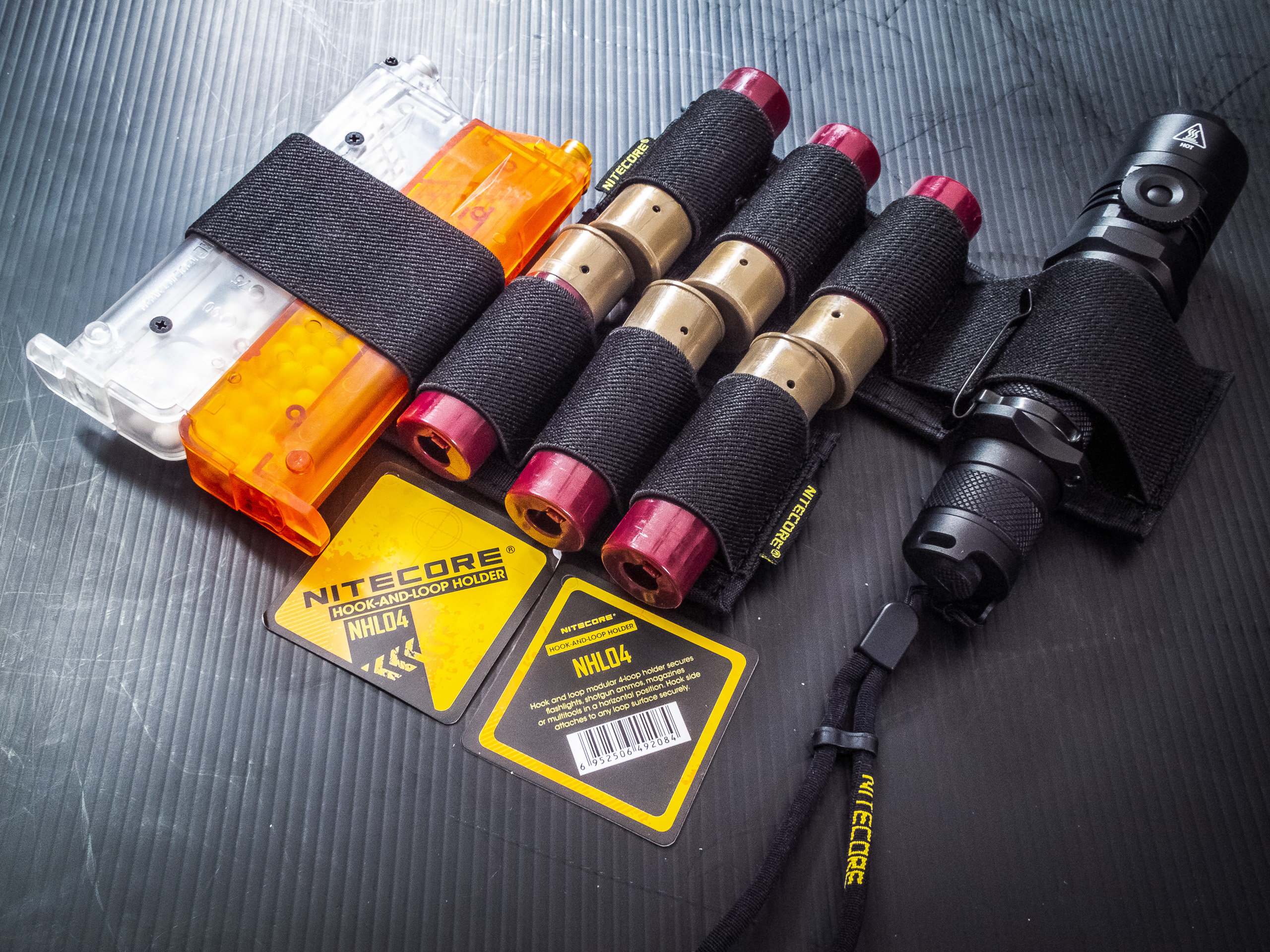 Since receiving this array of hardware my airsoft related accessories have become a harmony of organised bliss; it’s exactly what I needed, and arrived right at the time I was thinking of forking out a load of money to acquire something exactly like it, so I’m most impressed that I managed to acquire it for the purposes of review and only too happy to recommend it and Nitecore’s other products to anyone looking for a similarly practical and to be honest quite stylish and slickly presented carrying case and accessories.

The NTC10 itself is very well put together, with soft loop velcro surface covering much of its upper face’s central column, and Hypalon laser cut MOLLE PALS loops adorning the opposite bottom face’s central column in a 3 wide by 7 high PALS configuration - laser cut MOLLE seems to be all the rage given its vast weight and space savings and greater applicability to a variety of situations, at first I have to admit it didn’t instil the same comfort in its capabilities that the heftier Cordura Nylon PALS systems I’m more used to would. 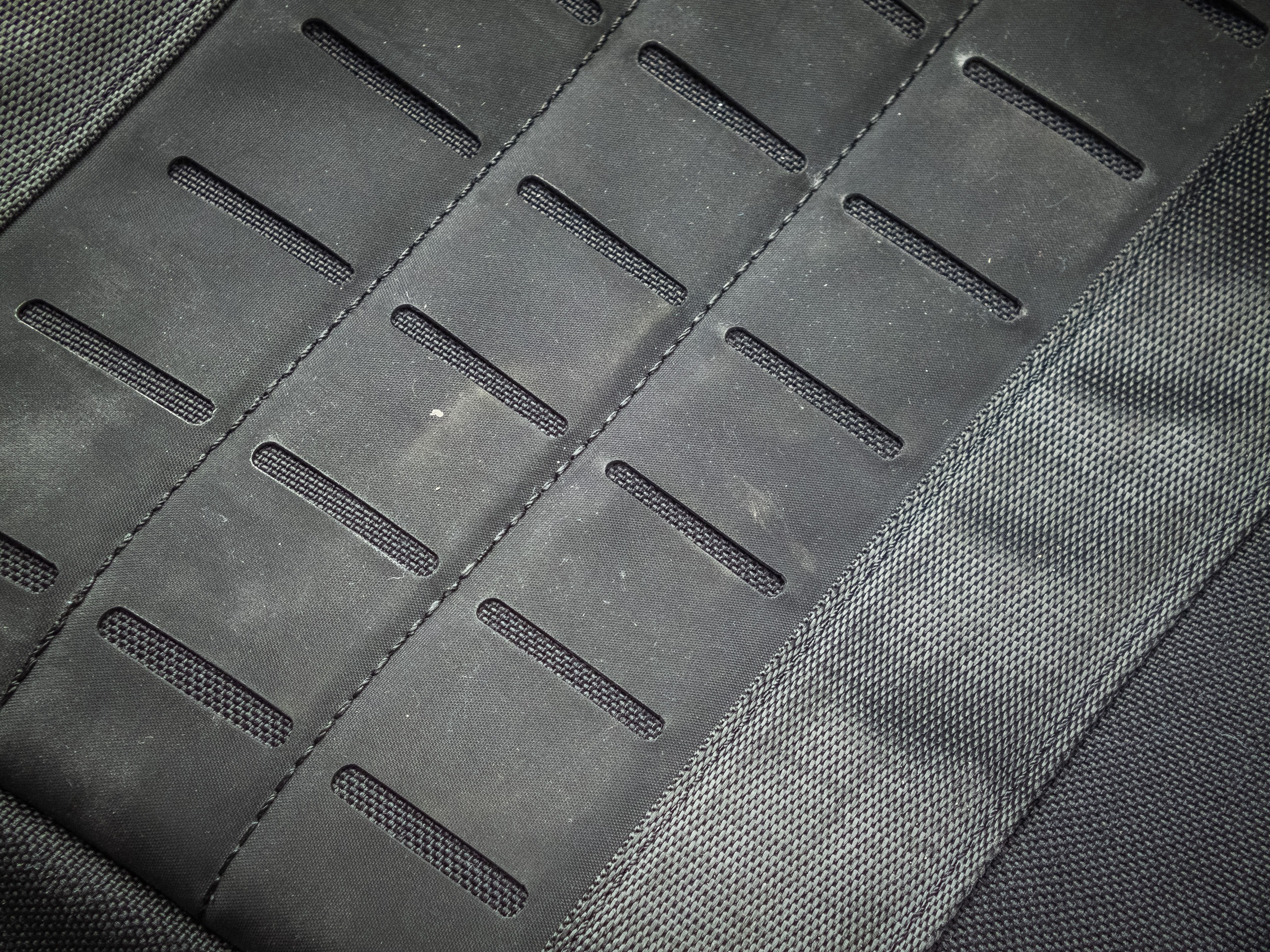 However having done some background research I now realise that Hypalon is for all intents and purposes bulletproof - perhaps even literally, to some extent at least - it’s the same rugged but lightweight material used in zodiac assault boats or similar inflatable support vessels as used by the likes of UK Special Boat Service or US Navy SEALs - so, people who get shot at for real and need kit they can depend on.

The build quality certainly makes itself evident in Nitecore’s offerings; the stitching is neat and appears heavy duty and hasn’t shown any sign of wear thus far, and you can be assured that if there’s a way for me to abuse or wreck equipment I usually find it; being notorious for carrying too much stuff whether hiking or shooting, and overloading things to borderline destruction or well beyond what normal mortals seem to think acceptable weight to carry… no PALS loop left unused!

The case looks very slick and business like, reminiscent of the quality and aesthetic of other market leaders and personal favourites such as 5.11 Tactical and FLYYE, it’s heavily constructed and comfortable to carry with the typical wide carry handles and wrap around Velcro retainer which keeps the two handles stuck together during transit, as well as heavy duty zips and related opening finger loops, which even have little rubberised sheaths over them to decrease the abrasion on your fingers - they really have thought of everything!

Inside the case the inside face adjoining the velcro covered ‘top’ outer face is plain but has a zip closure compartment which I have found is perfect for keeping documentation such as user manuals for the associated Gas Blowback guns being carried with the case in. The opposite inside face is completely covered in soft velcro loops to enable the user to add NHL01-NHL04 accessories or anything else that uses Velcro fixtures to their heart’s content.

Further to this is the central separator panel. This is a removable/reversible semi-rigid panel covered entirely on both sides by soft Velcro loop surface, enabling you to double or at a stretch even triple the useful carrying capacity of the case - it is fixed to the central/bottom rib of the bag that sits between the two upper and lower halves when the bag is opened and laid flat. 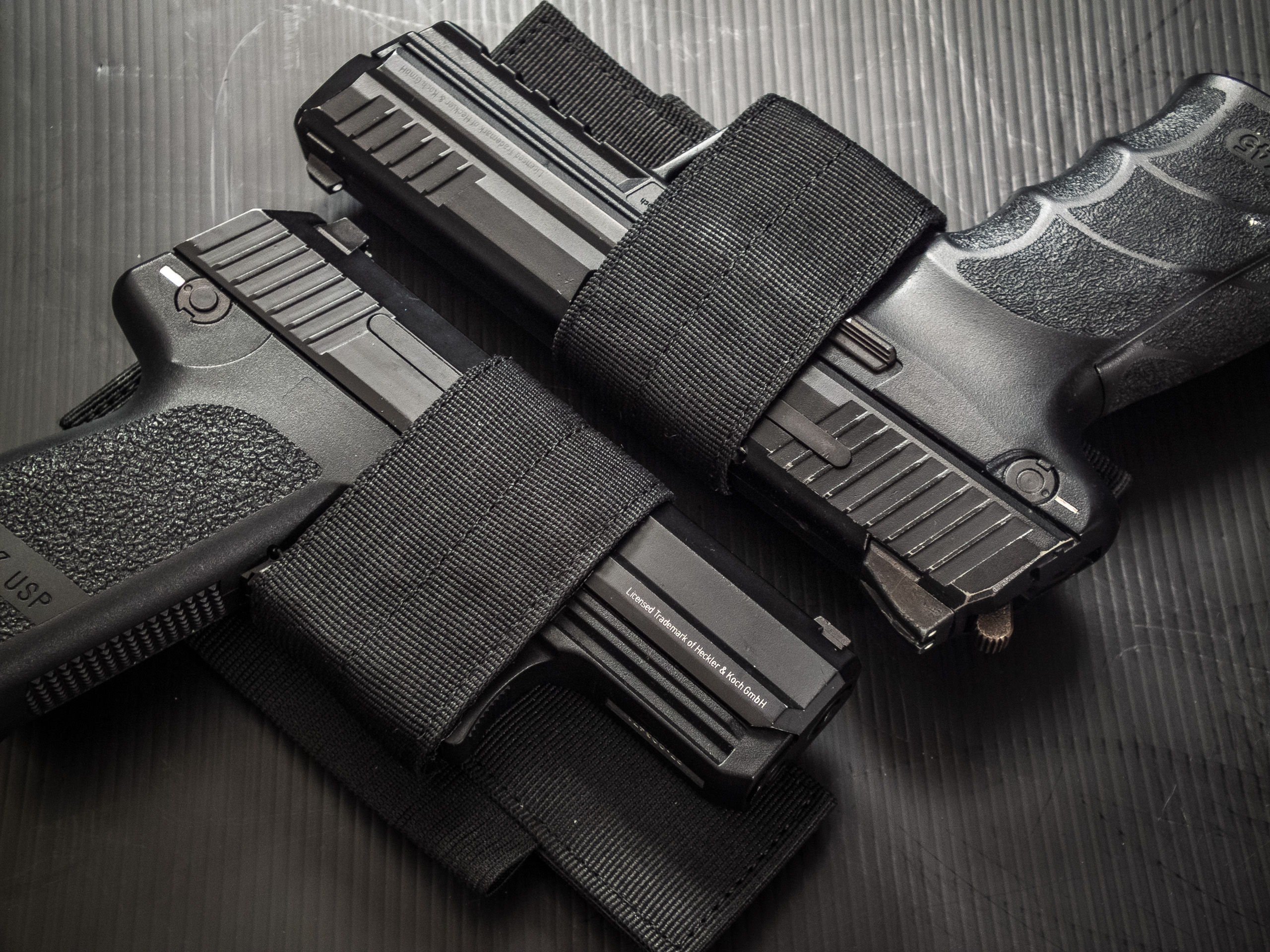 Currently I use one ‘level’ of mounting surface for each of my KWA H&K GBB pistols - my USP Compact resides on the permanent/ inside face of the bottom of the bag using one NHL01 CCW pistol retainer, two of the NHL02 twin magazine retainers to carry all four magazines neatly, and finally an NHL04 to retain both of my pistol speed loaders in the same compartment.

Atop this I use the central divider to mount roughly the same configuration for my HK45; an NHL01 CCW retainer, then the two NHL03 magazine retainers to hold the four magazines in place as well. The advantage of this configuration is, if I wanted to, I could easily remove the HK45 and its magazines along with the central divider to reduce weight and just take the USP Compact, its magazines and speed loaders, or - as is more often the case these days - when at the range or game sites; I open the case out on a flat surface and can then reverse the central divider so it sits in the empty upper half while open, laying both pistols and all their magazines and speed loaders out nicely in a neat and tidy working space that minimises the risk of things clattering into each other or going walkabout.

It’s a really slick setup that I’m very pleased with and I’m loving its utility and ease of use since I got hold of it; along with the TMC Yote Pack, TMC COVRTM4 and TMC EDCGear drawstring bag I no longer have to bother unpacking or repacking my equipment or risk forgetting or misplacing anything. I have a bag each for pistols, MP7 & G36C/Shotgun, and all the relevant magazines and accessories are permanently stored or carried with each one.

Better still, if I don’t fancy carrying the Nitecore NTC10 Tactical Case separately, it will fit perfectly into both the larger outer compartment of the TMC COVRT M4, or the extended net bib on the rear of the TMC Yote Pack; so I can carry everything I need in various comfortable, convenient and minimal fuss packages.

Overall I’m very impressed with the utility, build quality, functionality and adaptability of the Nitecore range, or at least what I’ve seen of it so far, I’m also very interested in getting my hands on their NEB10 or NEB20 excursion bags (they look ideal for the likes of the MP5k PDW GBB I’m contemplating if I can justify yet another gun purchase any time soon) as well as their NDP10 & BP20 packs - which look ideal for various smaller carry solutions compared to my usual go to FLYYE EDC Backpack.

From what I’ve gathered from the equipment they supplied and their literature, Nitecore are based out of GuangZhou, Mainland China, a city I’m already familiar with and have friends and excuses there to visit, perhaps I can make use of my remaining PRC Tourist visa before the end of the year to tag on an in person visit to their facilities along with the Tactical Shopping trip to Hong Kong I’ve been planning, as with FLYYE gear they appear to be rewriting the rule book and dispelling the myth that anything coming out of the mainland must be low quality - their products are anything but.