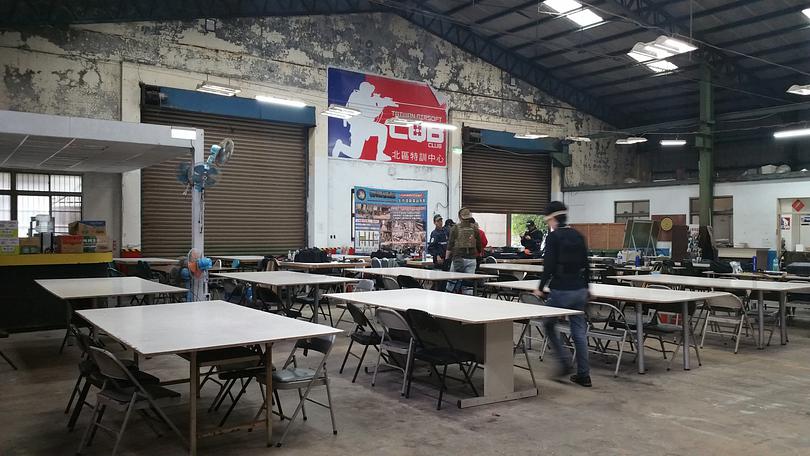 The last few weekends have been manic busy for me—lots of airsoft shopping as two of my teaching colleagues have decided to join the ranks of airsoft addicts, and one of them has even gotten his girlfriend interested and bought her all the gear for xmas. Me and one of them also went to Action Bunker's xmas shoot over this weekend just gone to do something a bit different, and me and the other one and his missus are planning on Action Bunker for their New Year's Eve shoot as well… again, just as a bit of a change to the normal festivities.

The previous two weekends, however, I have been shooting at the Taiwan CQB Training Centre in Linkou, NorthWest Taipei—I'd seen advertisements of it and other friend's photos on Facebook before but had considered it a bit of a trek to get to compared to the relative convenience of Action Bunker which is sat practically underneath an MRT station. 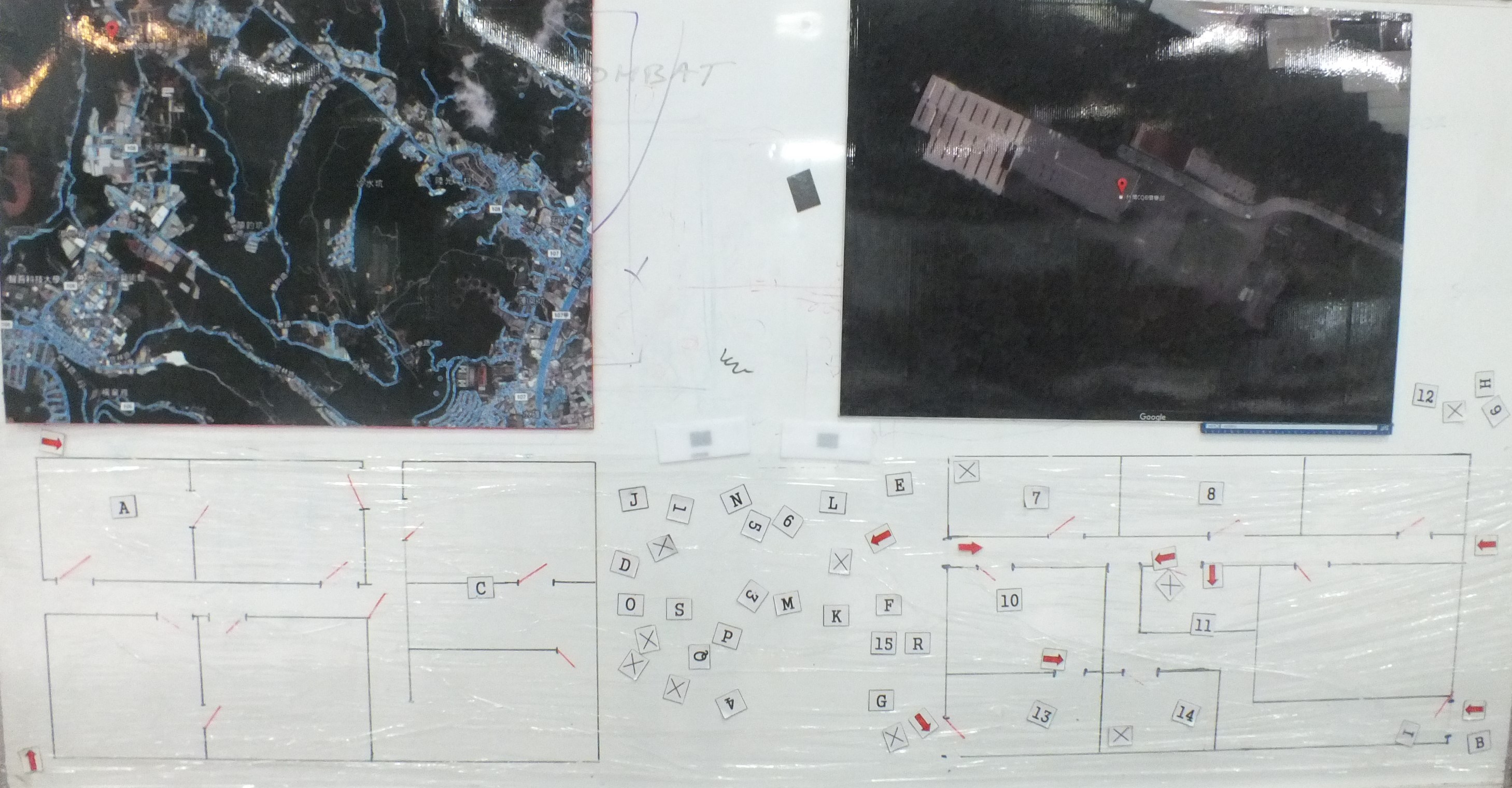 Taiwan CQB is a larger, mostly single storey industrial unit with a far more open plan arena of killing house style rooms and fake offices house in a warehouse style building with a decent sized safe zone with lots of tables and chairs, an on site shop for food and gun/gear rental as well as cooked meals or the ability to order in lunch box meals that get delivered from off site, which was quite a welcome opportunity between games to stuff some marginally healthier calories down our gullets. 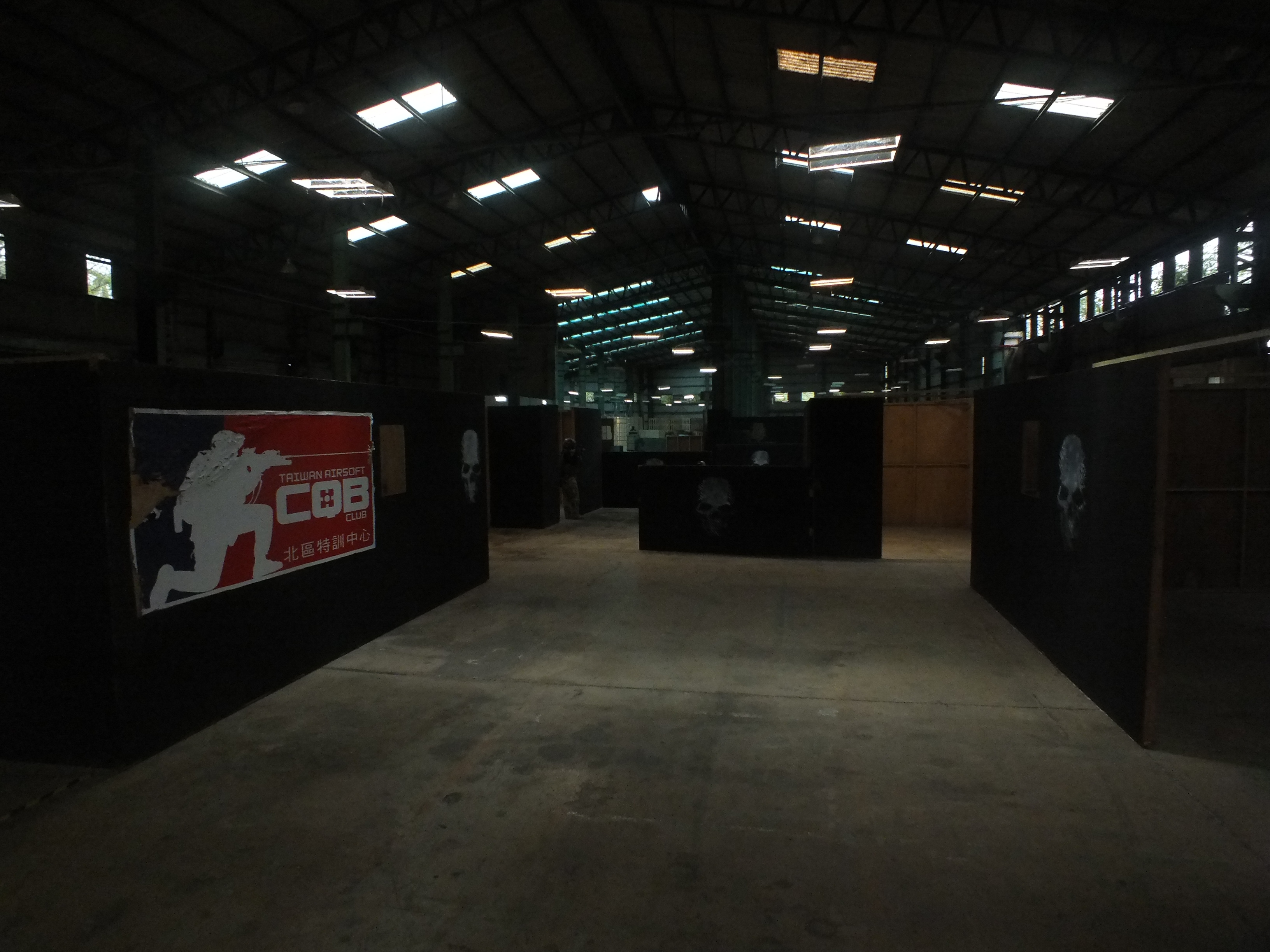 Apparently used by the local police and special forces during the week for more official style training (and occasionally amid our games at the weekends too, it seems) the killing house style arena allows for multiple avenues of attack and adaptive tactics and gameplay to try and hold or clear one side or the other (or both, if your teams are large enough) as you move down it—the game play for the most part is fairly casually organised—lots of groups of players tend to drift in and out throughout the day and it's basically a case of rock up in your group and try and find groups of similar size to play with and/or against to give you balanced teams, then the format tends to be a simple killing house clearance deathmatch, with opposing teams doing fire and manoeuvre from opposite ends of the arena to try and hold the middle ground or systematically wipe out the opposition with simple hit-and-out rules. 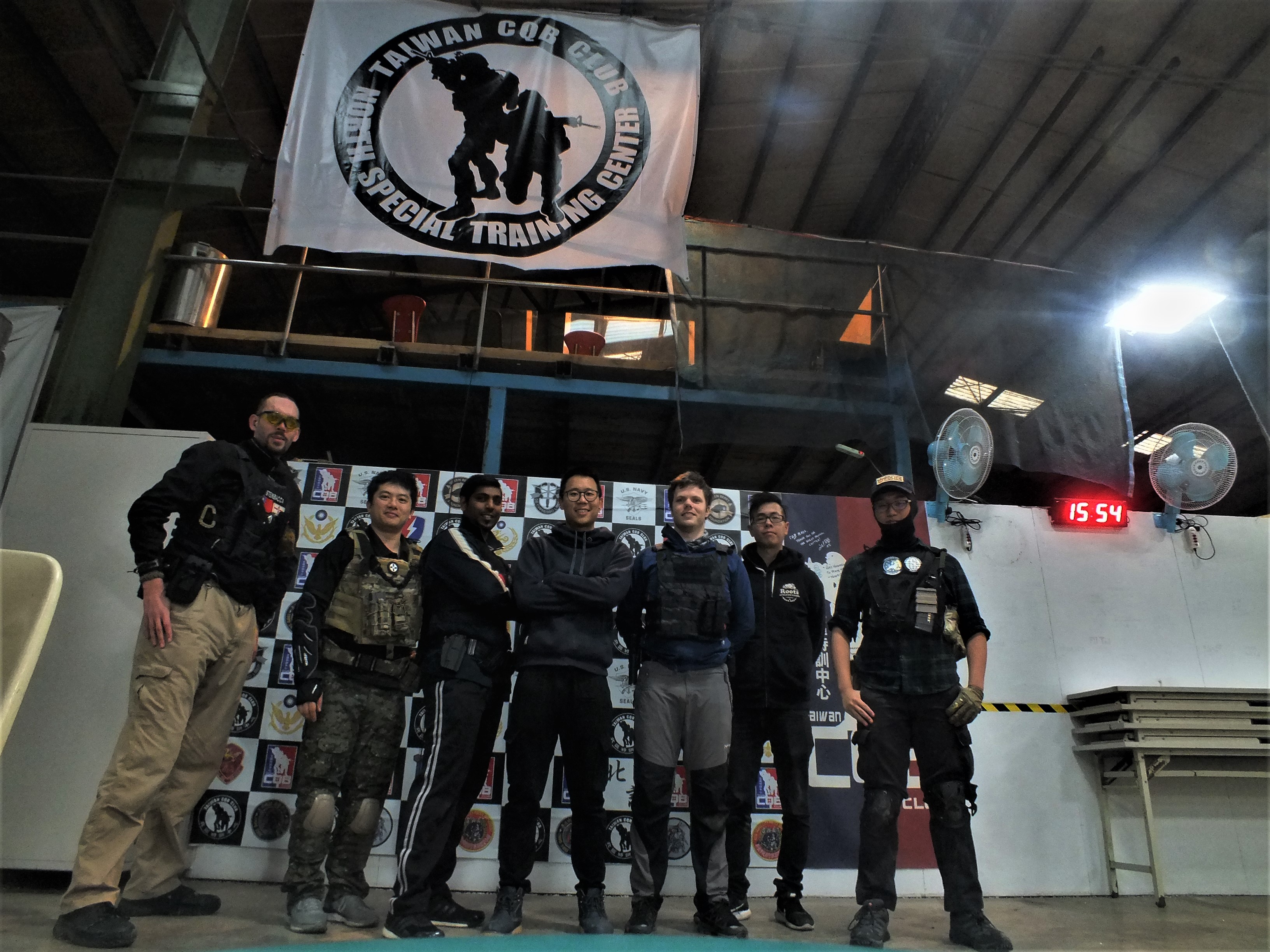 An interesting feature is the pay and play attitude of the operators… the doors open at 09:00 and you basically rock up whenever the hell you want, for as long as you want—sometimes as late as 21:00… or we've even heard of gaming continuing on until midnight or the wee small hours—and basically just pay NT350 and drop in and out of games as and when you can throughout the day for however long you are there for. 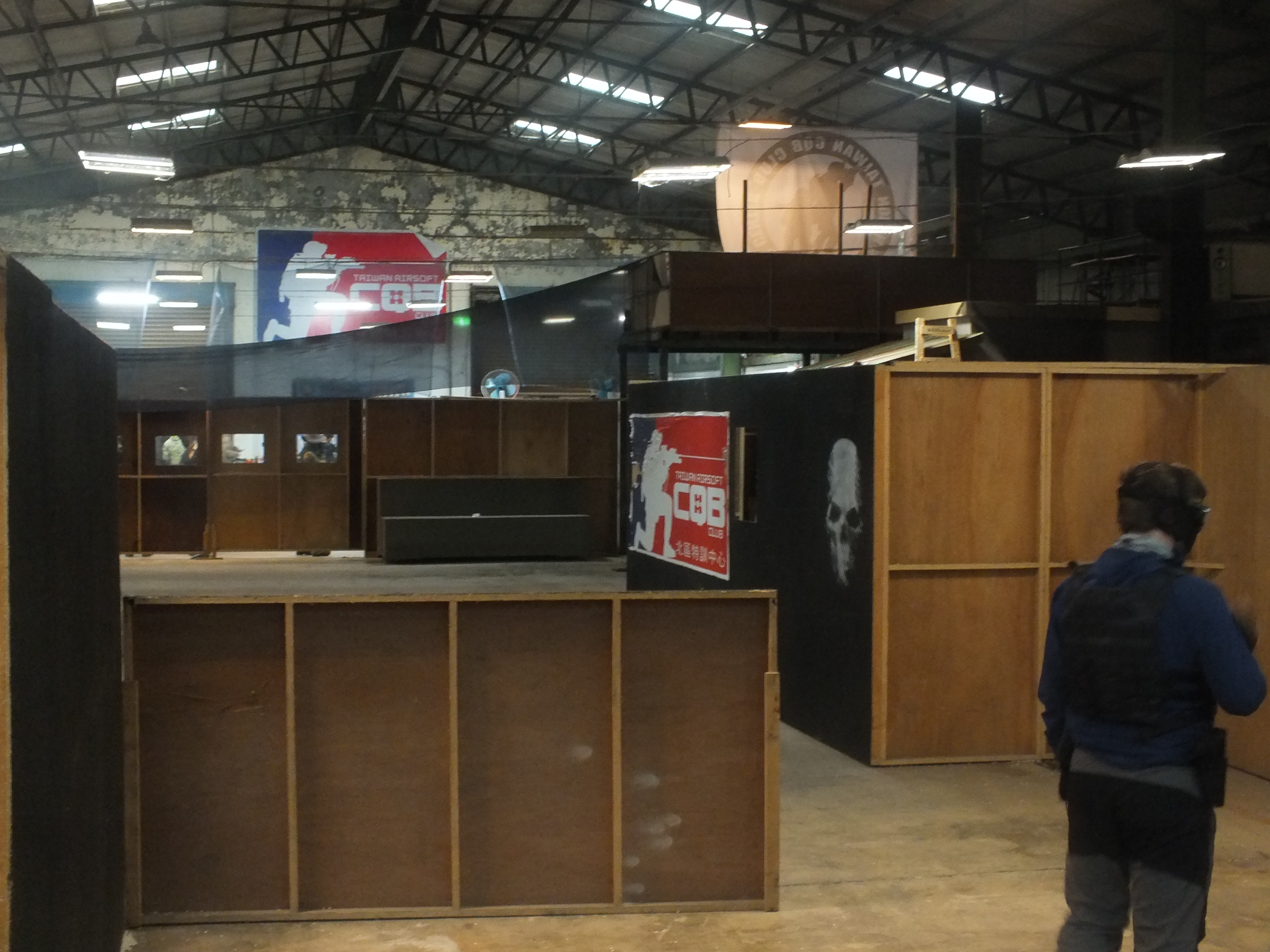 This more relaxed attitude and atmosphere is nice in general and means you can catch your breath between games or fix any issues without the feeling that you're against the clock or missing out, although it can also sometimes mean that you feel other groups are hogging the field a bit—some teams want to try out their tactics on their own or play against themselves alone which is understandable, but then if it takes them ages to complete a game because they're doing 2 Vs 2 or 4 Vs 4 alone and can't cover the ground quickly enough everyone else waiting around understandably gets a bit irked by it. In general the atmosphere is pretty friendly and relaxed with a lot of mingling of different teams or lone guns to make up the numbers for teams and making new friends on the way, in contrast to Action Bunker the clientele tend to be the more serious shooters and old hands like yours truly with all the gear and at least some idea, whereas Action Bunker is much more up close and personal but usually with a mix of experienced and newbie players with short games and more intense gameplay in a smaller area but with a more hectic timetable to suit their operating times and business model, although Action Bunker's more organised approach does also include mandatory chronograph for player's own kit—something which comparing war wounds leads us to believe folks might be slack on policing their own gear or using overpowered kit at Taiwan CQB given the longer distances played over but lumpier hits we were getting while there. 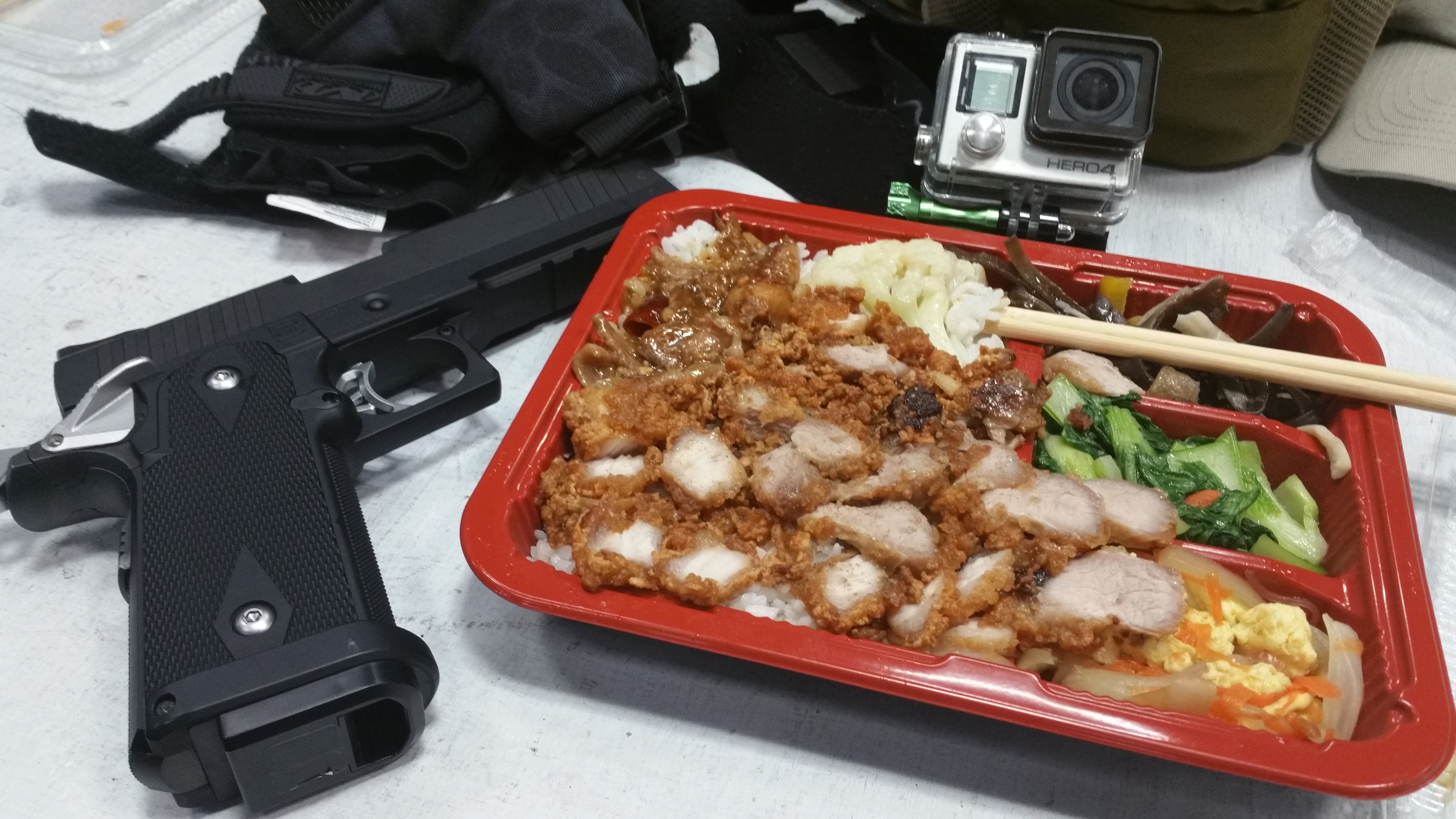 To get all the way out to Linkou is a lot easier if you have your own transport, however we did manage to get to and from there with the high speed rail to Banqiao followed by a NT500 taxi ride, and a NT250 uber ride back from there to the airport line MRT and into Taipei central. In all thought it seems worth the trek for the variety of gameplay and players and the potential for a long day's gaming for a flat rate if you want that or have the time.